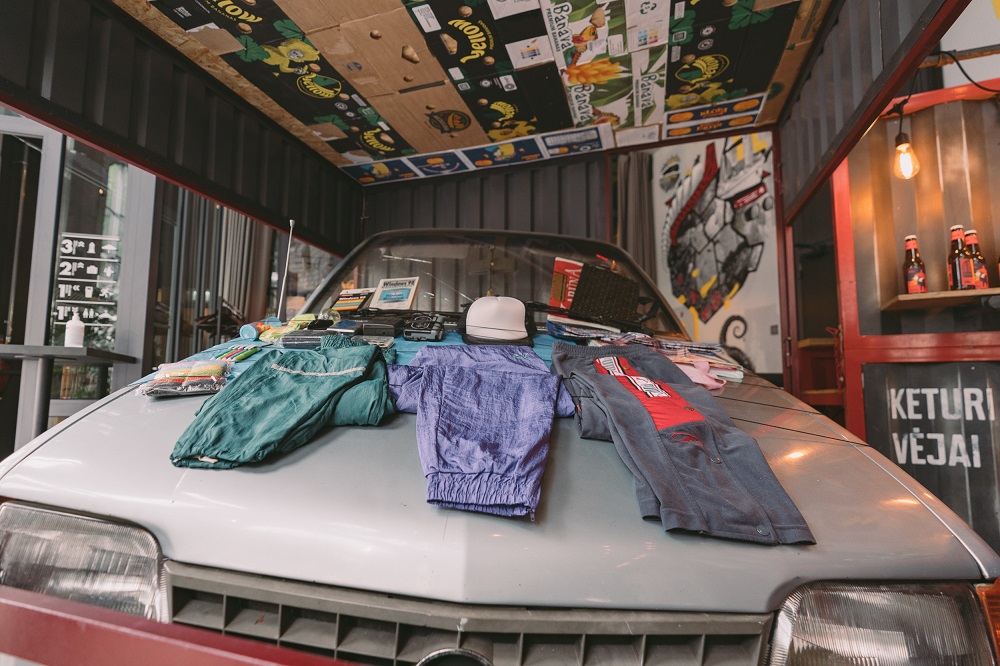 MO Museum exhibition “The Origin of Species: 1990s DNA”, which has attracted over 140,000 visitors, continues its story. During the summer, part of the exhibition was exhibited in Klaipėda, and from September, fragments of this exhibition will travel to other Lithuanian cities, including Utena, Telšiai, Panevėžys, Alytus and Šiauliai.

Part of the exhibition, which was on display in Vilnius, will be exhibited in different cities of Lithuania: the exhibition installations and works of the MO Collection will be specially selected and adapted to the spaces of the galleries or cultural centres of each city.

“Since the opening of the Museum, we have been willing to involve as many people as possible in the dialogue and conversation about culture and art. Therefore, we want to create and maintain a relationship with Lithuanian cities and regions: it is important that not only MO educational activities travel around Lithuania but exhibitions, too. The exhibition “The Origin of Species: 1990s DNA” stirred up a lot of reactions and emotions, and visitors could not remain indifferent. Hence, we are very happy that those who could not visit this exhibition in Vilnius will have the opportunity to see part of it in other Lithuanian cities,” says Milda Ivanauskienė, Director at MO Museum.

On 19-30 September, fragments of the exhibition “The Origin of Species: 1990s DNA” will be exhibited at Utena Cultural Centre. The team of MO Museum is also preparing a special exhibition presentation event, which will be attended by Director at MO Milda Ivanauskienė and one of the curators of the exhibition, one of the founders of the advertising agency Faksimilis, Mantas Pelakauskas, who originally comes from Utena.

At the exhibition presentation event, Utena residents will hear a special story by Pelakauskas, “1990s: Many things that happened”. Colourful sport suits, film cameras, rave, cassette players, tourist trips to Sopot, dreams of America. There were many things going on and a lot of them are trendy again. What is the reason and what comes as the result out of this, the real and imaginary nostalgia – Pelakauskas will elaborate on this, as well as behind the scenes of the exhibition “The Origin of Species: 1990s DNA” and its success.

The exhibition presentation event in Utena will take place on 24 September at 5.30 p.m. at Utena Cultural Centre.

Fragments of the exhibition “The Origin of Species: 1990s DNA” will travel from Utena to other Lithuanian cities. On 6-24 October, the exhibition will be exhibited in Telšiai, on 28 October–November 21 in Panevėžys. It is also planned that on 27 November–20 December it will be possible to visit it in Alytus, and the end of the exhibition is planned for January 6-30, 2021, in Šiauliai.

Nostalgia and memories are a great power that allows us to rethink not only our history but also the events of today. Thus, the curators of  MO Museum exhibition tried to name the phenomena typical of the 1990s and analyse them through everyday objects and artworks that refer to the theme of the story told at the exhibition. Sharing memories was the beginning of the exhibition creation process. And by remembering the 1990s, curators say they understood how different and diverse they were.

The travelling exhibition will invite visitors to detect and discover some well-known phenomena, even to recognise the peculiar character-types of the period. In addition to the legendary kiosk installation, it will also be possible to find out what Netflix looked like in the 1990s.

The clothing trends of the 1990s are once again popular all over the world today, but that decade is important for us not only in terms of fashion. This period contains the first years of our restored independence. By looking back at this time from the present perspective some feel nostalgia while others may not even want to remember it. After all, the 1990s is the decade of great breakthroughs and changes. It is not just the beginning of the country but the beginning of our own new stories, when the situations and statuses of the people changed radically and new opportunities or even risks emerged.

Together with the achieved freedom new market rules appeared, and the scarcity was soon replaced by the colourful supply. Everyone began to fight for their place under the sun. New species began to emerge out from the unified masses. And in order to survive, they had to conquer spaces, enforce their own rules, cluster into networks and build their own identities.

In order to get to know the 1990s more deeply or learn more, the Museum team has prepared a special e-guide. It is an easy and simple way to use your own phone to hear the story of each artwork and exhibit. You can listen to the e-guide here: https://gidas.mo.lt/

Curator at MO Museum Deima Žuklytė-Gasperaitienė has selected the artworks for the exhibition travelling around Lithuania, while architect Joris Šykovas adapted the exhibition to the spaces of each city.

The MO Museum exhibition travelling around Lithuanian cities is partly funded by the Office of the Government of the Republic of Lithuania. The entrance to the exhibition and related events are free, the organisers inform that it is important to keep a safe distance and wear protective face masks at the exhibition and events.