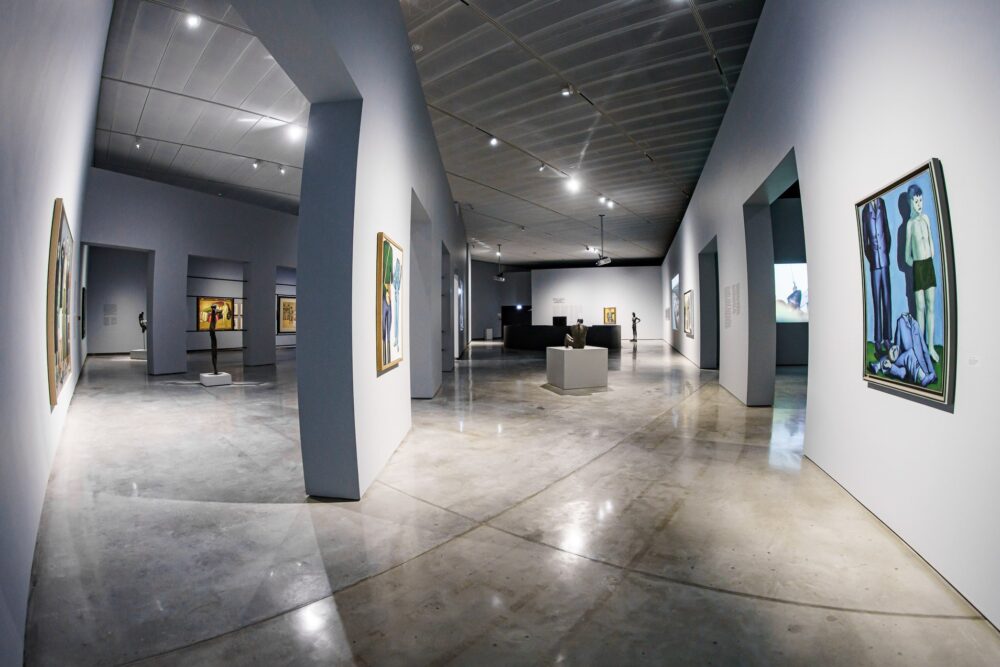 MO Museum presents a new exhibition “A Difficult Age. Szapocznikow – Wajda – Wróblewski”. After the outbreak of a global pandemic, the opening of the exhibition originally planned for the autumn of 2020, had to be delayed to 2021. The exhibition presents the work of Poland’s most prominent and widely acclaimed post-war artists: film director Andrzej Wajda (1926–2016), conceptual sculptor Alina Szapocznikow (1926–1973), and painter Andrzej Wróblewski (1927–1957).

The exhibition “A Difficult Age. Szapocznikow – Wajda – Wróblewski” is the largest and most ambitious MO Museum project to date, involving 25 foreign museums, galleries and private collections. About 120 works are on display from 5 different countries. 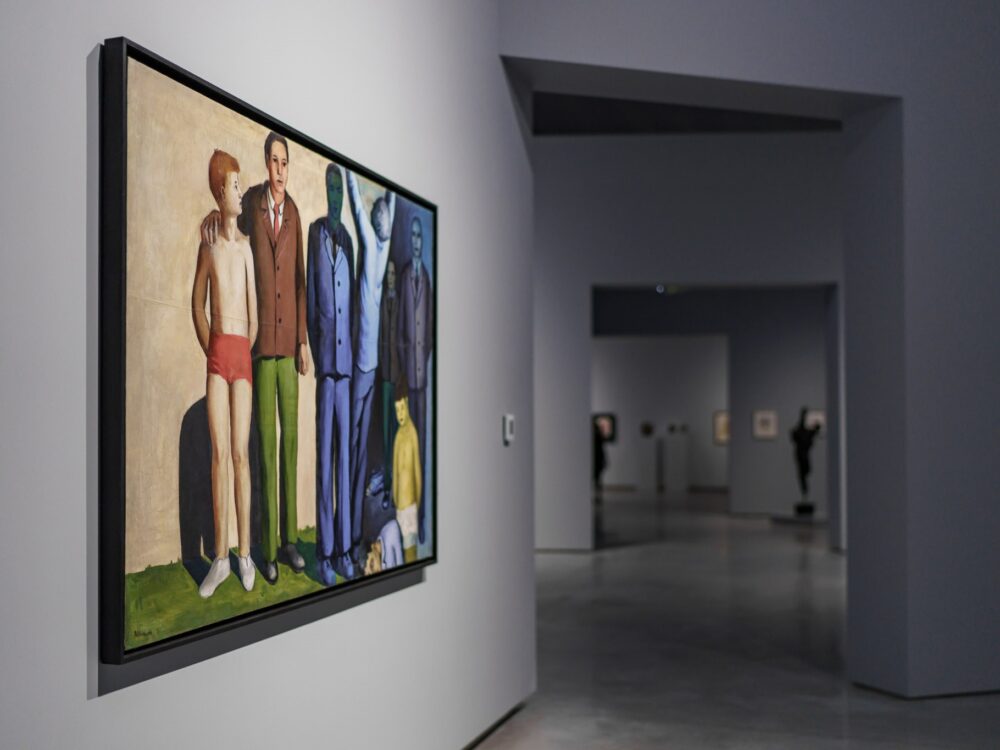 “We are very proud and happy with this exhibition. We will present Poland’s most prominent artists, whose works can be seen and admired in one place – a truly extraordinary opportunity. We are grateful to many people for being able to present this exhibition to the Lithuanian public”, says Milda Ivanauskienė, MO Museum director.

“This is yet another project of the Institute that presents the works of the most prominent Polish post-war artists. After “Waiting Room”, last-year’s successful exhibition of Andrzej Wróblewski held in the Slovenian Moderna Galerija, we bring the body of works of the post-war generation of artists to Lithuania to allow the local audiences to discover how similar experiences have been interpreted through painting, film and sculpture”, says Barbara Krzeska, Deputy Director of the Adam Mickiewicz Institute.

We are very proud and happy with this exhibition. We will present Poland’s most prominent artists, whose works can be seen and admired in one place – a truly extraordinary opportunity. Milda Ivanauskienė, MO Museum director 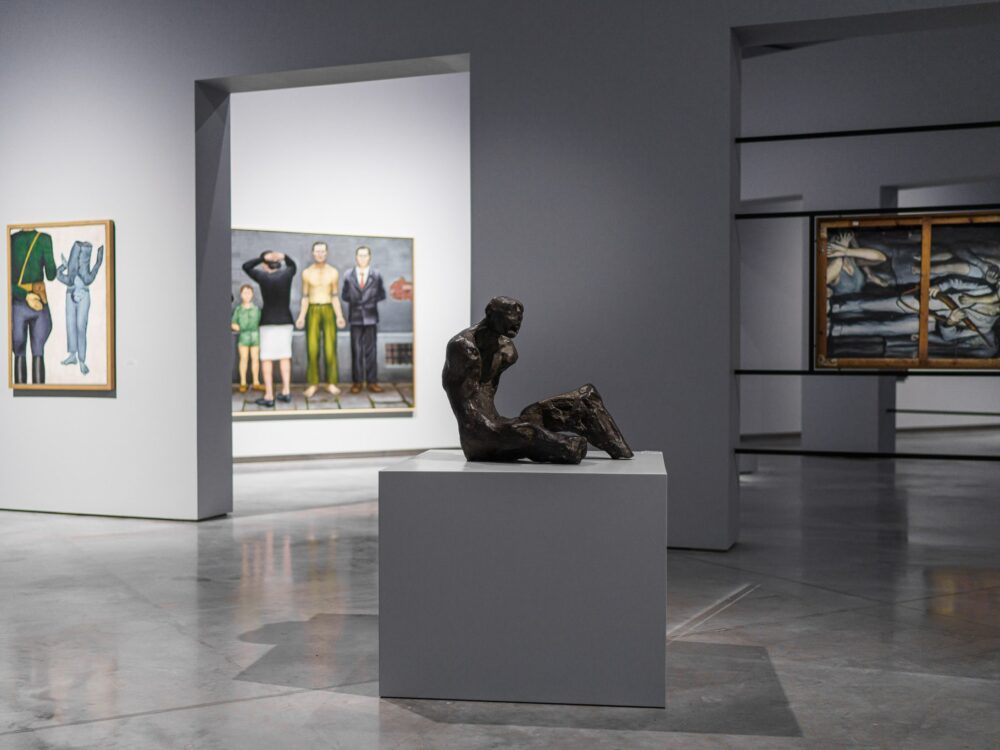 The artists exhibited in the exhibition are famous all over the world. The works of A. Szapocznikow have been presented at the MoMA Museum in New York and at the Pompidou Center in Paris. A. Wajda has won numerous international awards, including an Oscar for Lifetime Achievement. And A. Wróblewski is considered one of the most prominent post-war Polish artists who was born and raised in Vilnius.

The curator of the exhibition is the legendary Polish art historian and curator Anda Rottenberg. Former director of the Polish National Gallery “Zachęta”, author of several books, culture editor of “Vogue Polska” magazine, A. Rottenberg is also an active participant in civic initiatives. She also joined the ongoing mass protests for women’s rights in Poland. 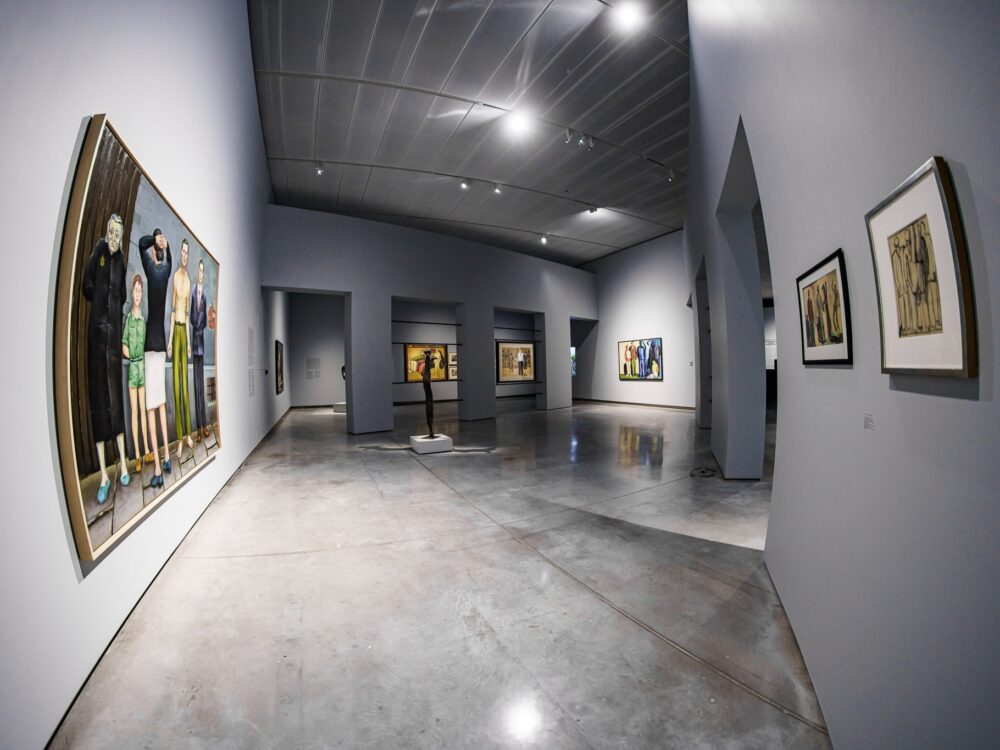 At the centre of this exhibition are the “war-infected” works of three artists from the same generation. All three of them are considered to be the best creators of post-war Poland. They are connected not only by close dates of birth and an early loss of parents, but also by having to experience adolescence during the war. After the war, the three creators were forced to live in an atmosphere of a political and ideological situation imposed by the communist regime: Poland’s collective memory had been suppressed for at least four decades.

The curator of the exhibition reveals how the same symbols and metaphors repeat themselves in different areas of art: painting, cinema, and sculpture. Visitors of the exhibition are presented with the “war-infected” works of three artists.

“The exhibition aims not only to reinterpret well-known artworks and films, but also to reveal what connects the works of three artists obsessed with war and death. Adolescence itself is often perceived as a traumatic age. Due to circumstances such as family life, relationships with peers, the education system or sexual initiation this period can determine the whole life of a person. And if one has to experience the death of a parent, endure the hard-to-bear daily life of war, with very little virtue and decency, they come to face a “wartime adolescence syndrome”, marked by exceptional stigma“, says A. Rottenberg, curator of the exhibition.

The title of the exhibition is borrowed from A. Szapocznikow’s sculpture from 1956, depicting a teenage figure. A Difficult Age refers both to a difficult, tragic historical time, and one of the most important and complicated periods of human maturation – adolescence. Visitors of MO Museum will have an opportunity to see this sculpture as well. 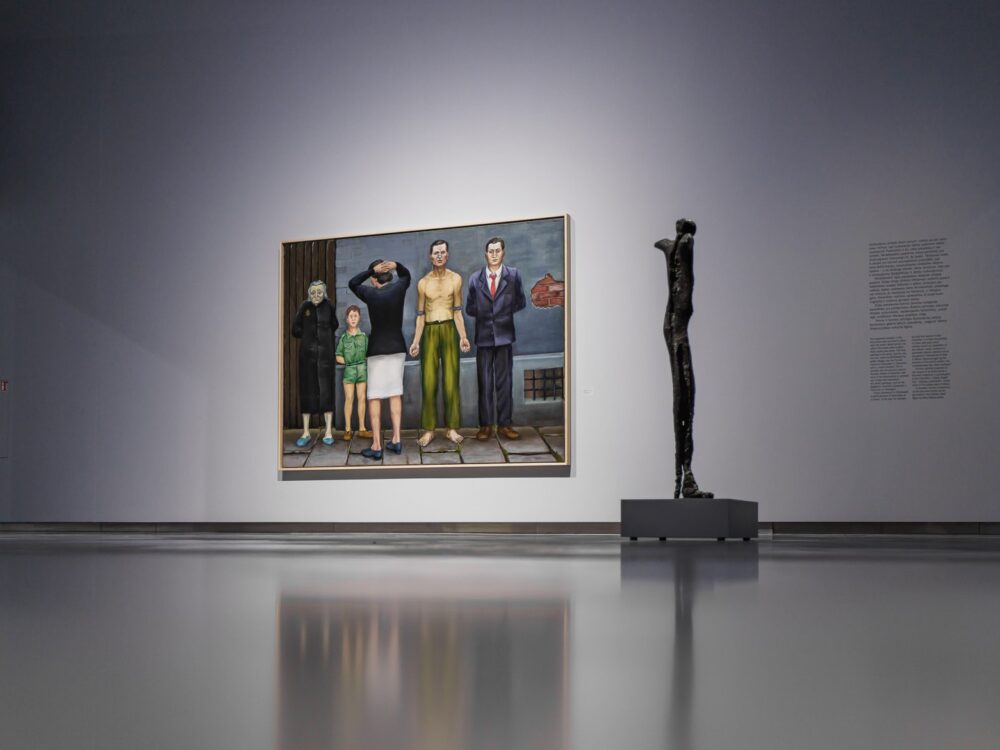 A. Wróblewski’s history in Poland usually begins in 1945, although he began his career in Vilnius. The painter was born and raised in Vilnius, in the family of the famous artist Krystyna Wróblewska and Stephen Bathory University Professor Bronisław Wróblewski. Andrzej lived in Vilnius until he was eighteen/nineteen, and it was in Vilnius where he began his artistic journey, creating his first woodcut prints and auditing classes at the Vilnius Academy of Arts as a teenager during the war years. Sadly, the war destroyed his family’s life. His father died and, in the spring of 1945, Andrzej, his mother, and brother were forced to leave Vilnius and repatriate to Poland.

“One of the main reasons for this project was understanding of how little A. Wróblewski, who was born and raised in Vilnius, is known in Lithuania beyond a narrow circle of professionals and how awkward it still is to talk about the history of Vilnius in the whirlwind of World War II”, says M. Ivanauskienė, MO Museum director. 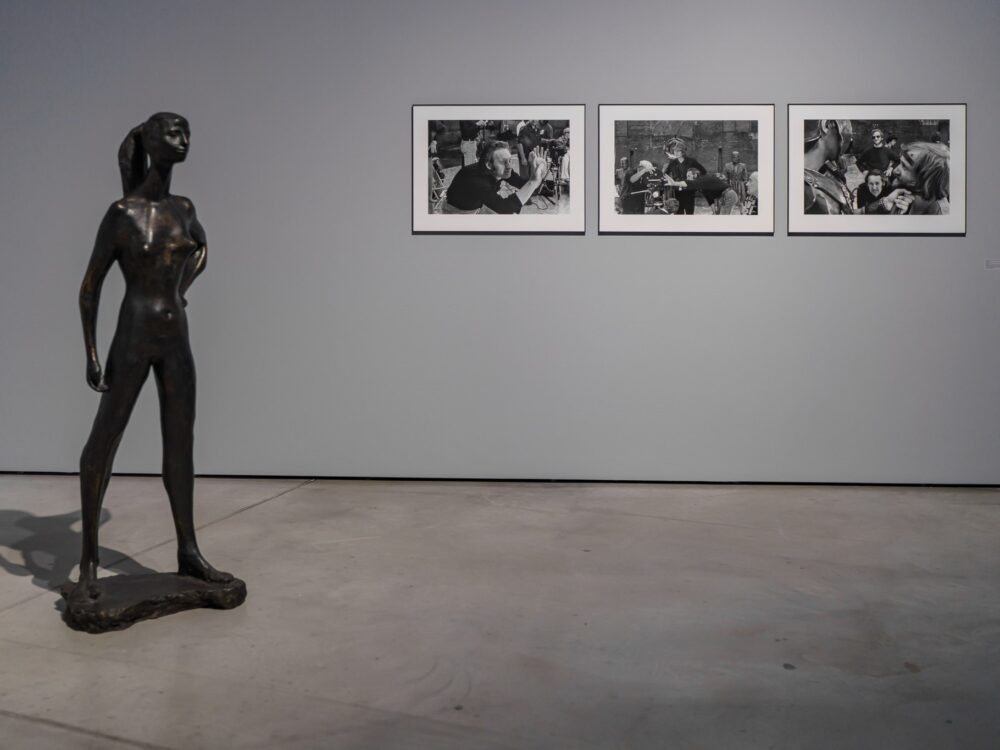 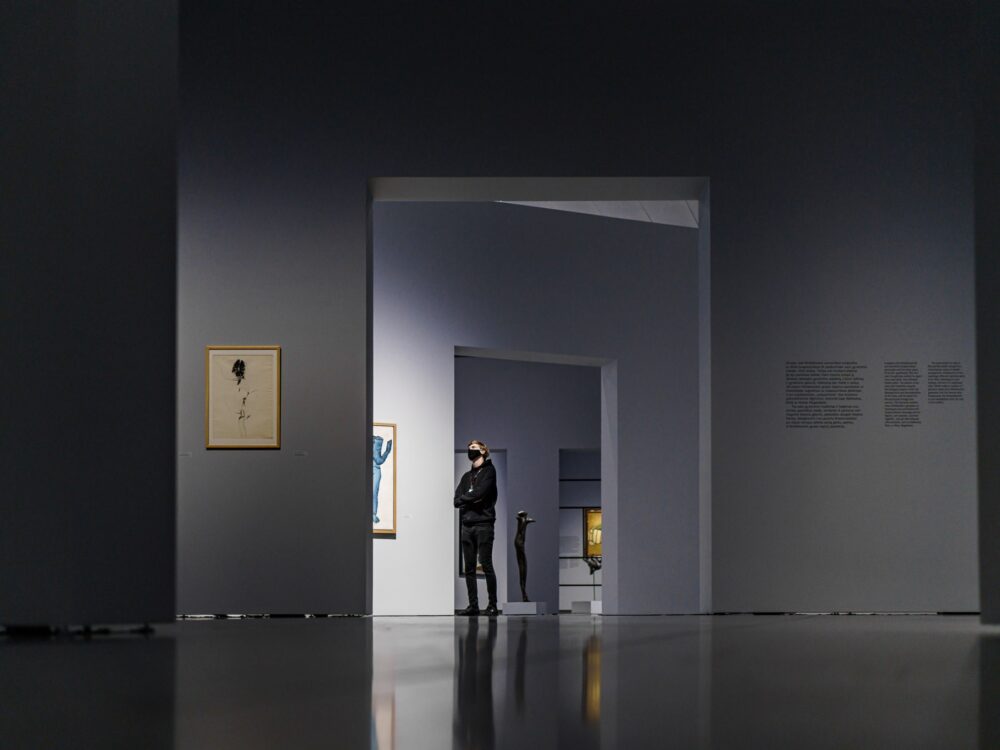 Exhibition is open at MO Museum till July 18. You can read more:

The exhibition is co-financed by the Ministry of Culture and National Heritage of the Republic of Poland as part of the international cultural programme coordinated by Adam Mickiewicz Institute as part of the multi-annual programme NIEPODLEGŁA 2017–2022. Read more: https://culture.pl/en

The exhibition is also financed by Lithuanian Council for Culture. 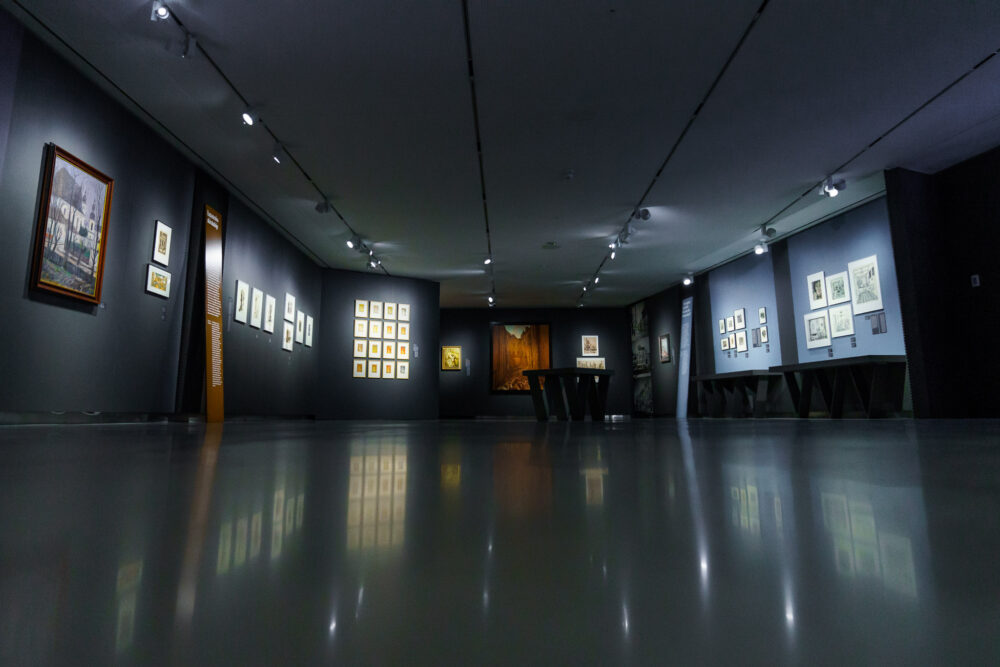 The theme of the exhibition in extended in MO Museum small exhibition „A Difficult Age: Vilnius, 1939–1949” (curator Giedrė Jankevičiūtė). This exhibition presents the context of the Vilnius era allowing us to take a deeper look at the dramatic decade of Vilnius. At that time, both the life of the city and the everyday life and identity of Vilnius residents changed. All of these transformations are revealed in this exhibition through a collection of artefacts: works of art, photography, documents, and architectural plans. Read more:

MORE ABOUT THE EXHIBITION

Artists presented in the exhibition

Alina Szapocznikow is a Polish sculptor who survived the Holocaust. She radically reconceptualized the sculpture. Szapocznikow began experimented with new materials and techniques, using assemblage, plastic cement, polyester and toxic polyurethane. She focused on the themes of death, illness, temporality and female identity. In the 1960s Szapocznikow joined New realism and Pop art movements in Paris. Her works have been presented at the MoMA Museum (New York), WIELS Center for Contemporary Art (Brussels), Pompidou Center (Paris) and others.

Andrzej Wróblewski was born and raised in Vilnius, in the family of the artist Krystyna Wróblewska and Stephen Bathory University Professor Bronisław Wróblewski. He is considered one of the most prominent post-war artists in Poland. The artist presented an exceptional approach to the themes of war, death, and historical memory. His recent exhibitions in Van Abbemuseum, Eindhoven and Reina Sofia Museum, Madrid paved the way of his international recognition 50 years after hie premature death.

Andrzej Wajda is one of the most prominent Polish film directors in the world, known as the author of “Canal” (1957), “Ashes and Diamonds” (1958) and “Katyn” (2007). The complex historical themes of Poland, the horrors of war, ideological oppression and human moral self-determination are the main themes of his films. Wajda’s films have won the Golden Palm Branch, the Golden Bear at the Berlin Film Festival and many other awards, the director has received the European Film Academy Award and the Lifetime Achievement Award for all his work.