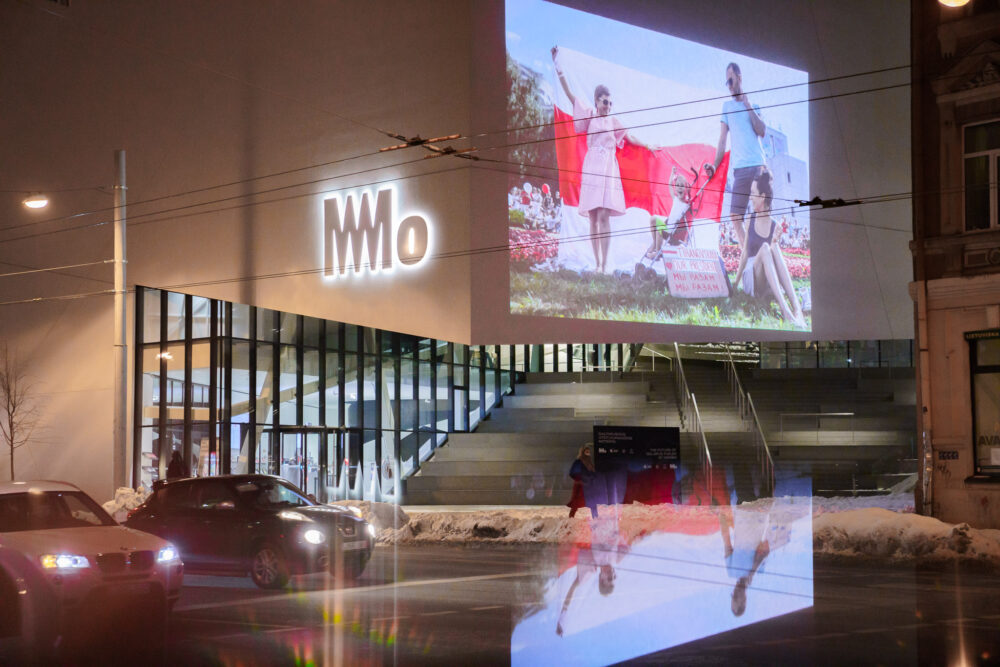 Support for Belarusians fighting for freedom – photos of five Belarusian photojournalists are projected on the MO Museum building in Vilnius. The photographs record both the brutal suppression of demonstrations and the women’s chains of solidarity holding flowers in their hands. The outdoor projection “The Future of Belarus, Fueled by Women” reflects the female view of Belarusian photojournalism covering women’s protests.

It’s a sad coincidence that the exhibition by Belarusian photojournalists was launched the same day (February 18) when two Belarusian journalists have been sentenced to two years in prison after filming live coverage of last November’s protests against President Alexander Lukashenko.

Supporting the freedom of neighbours 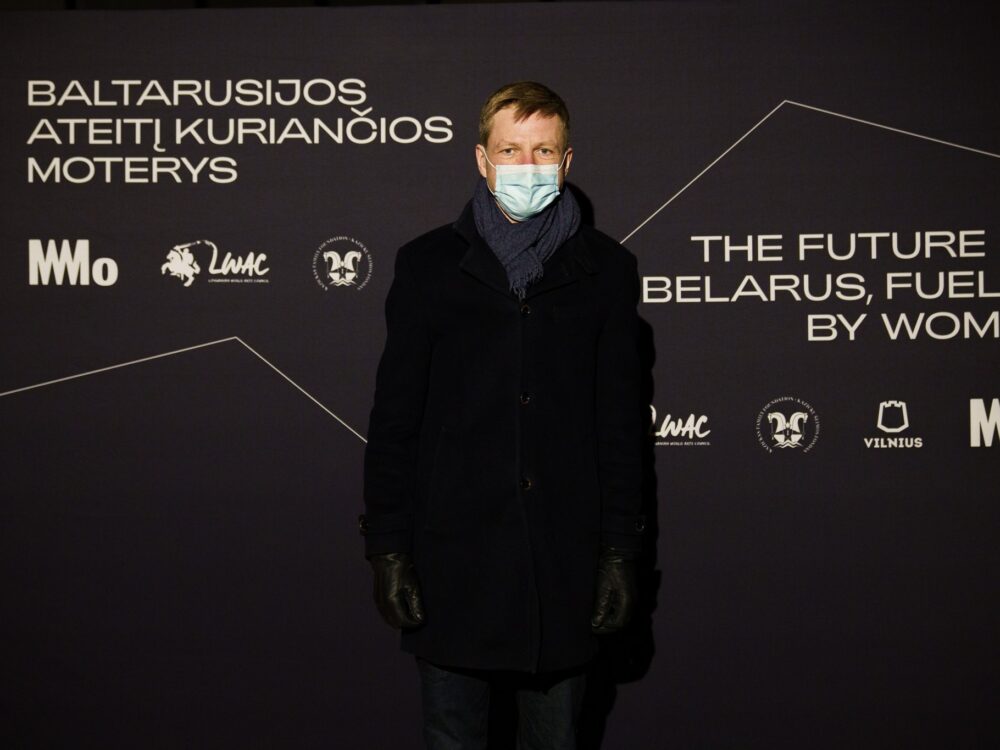 “A few days ago, we – Lithuanians – celebrated the day of the restoration of our state, we celebrated freedom, we remembered the difficult path we had to follow. Belarus has chosen to follow this difficult path to freedom too. Vilnius is always open to bold ideas, creativity, freedom of expression for Vilnius residents and guests, but it has also become a safe asylum for our Belarusian neighbours”, says Remigijus Šimašius, Mayor of Vilnius.

There was one common cause for all of us – to restore freedom and law in Belarus, and women stood in the front lines of this struggle. For many women, this struggle became personal. Svetlana Tikhanovskaya

“It is to Belarusian women that this exhibition is dedicated. There was one common cause for all of us – to restore freedom and law in Belarus, and women stood in the front lines of this struggle. For many women, this struggle became personal. It is personal for Alena Bandarenka, who demands the investigation of her son’s murder. It is personal for Volha Seviaryniec and Darya Losik whose husbands are in prison since early summer. It is personal for Tatsiana Khomich, whose sister Marya Kalesnikava was kidnapped for challenging the dictator. It is also personal for me”, says Svetlana Tikhanovskaya, the leader of the Belarusian opposition.

S. Tikhanovskaya also adds: “The regime cronies did not understand that they made the political struggle personal for every Belarusian family. It might be possible to pressure the opposition, but it is impossible to overcome the entire nation”. 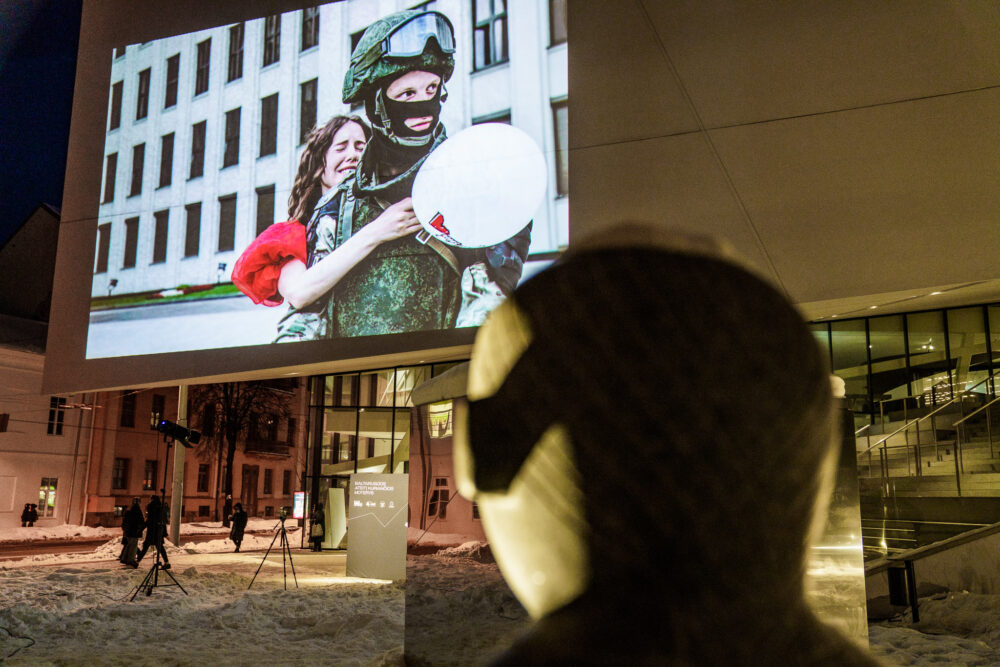 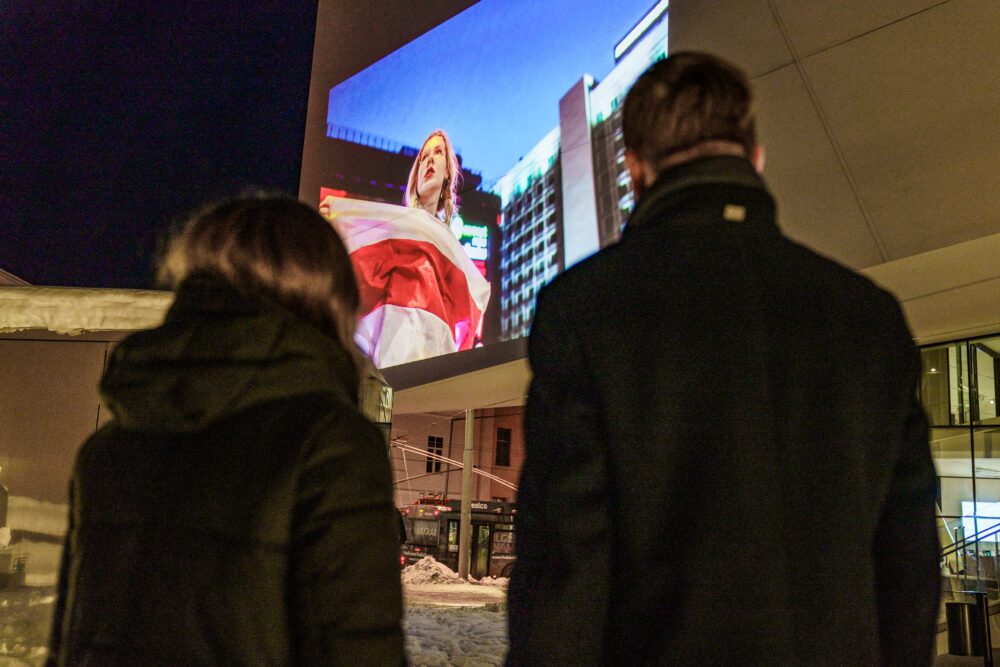 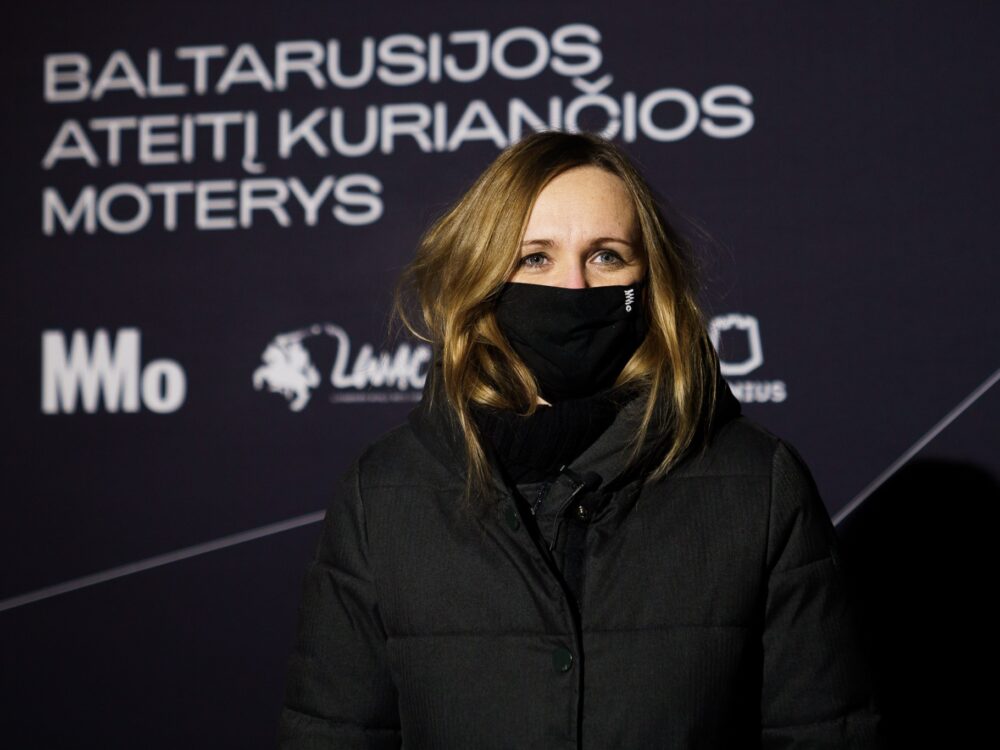 “By exhibiting the outdoor projection “The Future of Belarus, Fueled by Women”, we express our support and solidarity. In addition, this exhibition is also relevant to us Lithuanians. Photographs by Belarusian photojournalists will be exhibited between two important dates for our state, its freedom and independence – February 16th and March 11th. The confrontation of peaceful protest with brutal force is also reminiscent of our struggles for freedom. We invite to see the photos where the protests take place and the revolutions are born – outdoors”, says Milda Ivanauskienė, director of MO Museum.

M. Ivanauskienė adds: “In this context, it is important to pay attention to the significant participation of women in state-building. This is also relevant for us, mentioning the 1918 February 17 protest demanding the inclusion of women in the Council of Lithuania”.

Launch of the exhibition

You can watch the video of the launch of the exhibition with the Mayor of Vilnius Remigijus Šimašius, the leader of the Belarusian opposition Svetlana Tikhanovskaya and MO Museum director Milda Ivanauskienė.

The exhibition “The Future of Belarus, Fueled by Women” reflects the female view of Belarusian photojournalism covering women’s protests, the contrast between peaceful confrontation and the overt violence unleashed by authorities.  Women have become the symbol of such protests in Belarus, fighting courageously against the patriarchal government.

Five Belarusian photographers – Nadia Buzhan, Darya Burakina, Iryna Arakhouskaya, Volha Shukaila, and Viyaleta Sauchyts – understood the importance of the historic moment and carefully documented all of the most important events of the 2020 protests against election fraud and the subsequent violence committed by the regime of Alexander Lukashenko throughout Belarus. The so-called women’s marches steered the protests onto a peaceful course and shaped the agenda of the Belarusian revolution. It became a nonviolent resistance – a modern form of protest in 21st century Belarus.

Five young photojournalists had to overcome their fear and take risks every time. So that now everyone could see the captured protests in their photos testifying what’s happening in Belarus. 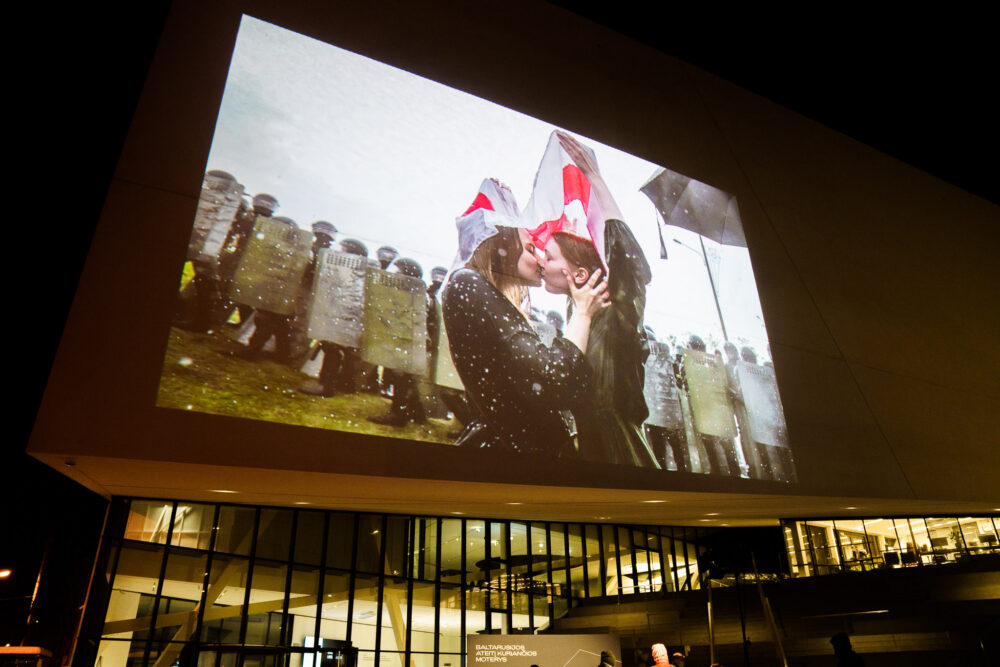 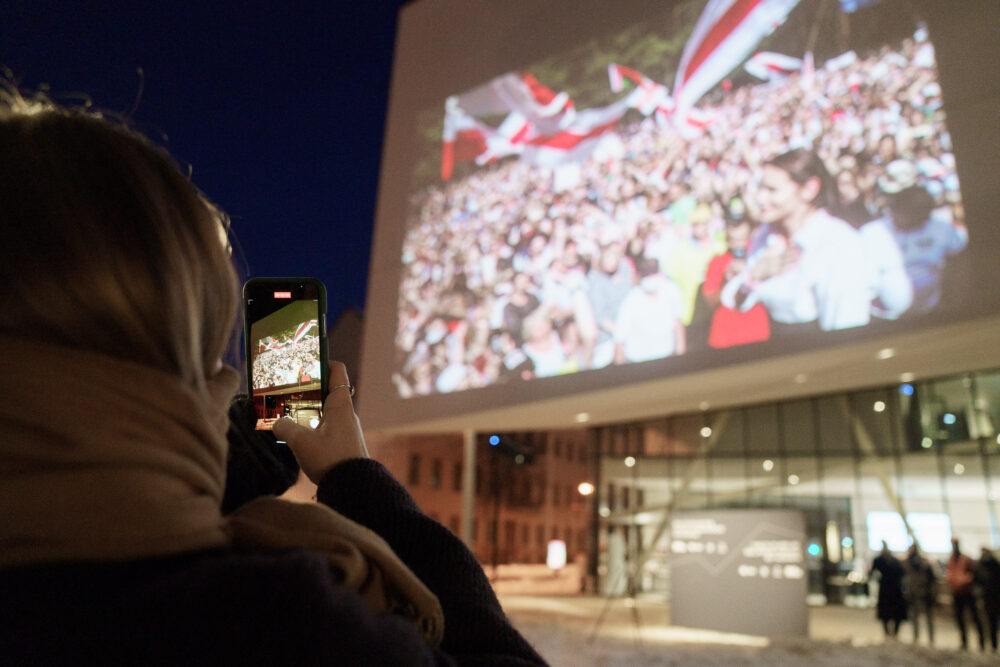 Photographs capturing images of protests in Belarus are shown in cooperation with the Art Center in Estonia “Fotografiska Tallinn” and the platform representing Belarusian photojournalists “Shklo”. The photographs are shown for the first time in Lithuania. Before that, they were exhibited in Estonia.

Darya Burakina is a photojournalist born in 1992 in Minsk. She graduated from the Institute of Journalism at the Belarusian State University. She also studied documentary photography at the Docdocdoc school in Saint Petersburg, Russia. Since 2014, Burakina has been collaborating with a range of Belarusian print and internet media outlets. Since 2016, she has been a photojournalist for the TUT.BY media portal.

Iryna Arakhouskaya is a photographer and a camerawoman. She was born in Minsk in 1992, where she continues to work today. Arakhouskaya has been collaborating with various independent Belarusian publications since 2013. She studied documentary photography at the Docdocdoc school in Saint Petersburg, Russia. Currently, she is a student at the photography faculty at Szkola filmowa in Łódź. Arakhouskaya’s main interests are human rights, the social sphere, the environment, and reportage photography.

Nadia Buzhan is a photojournalist born in 1991. She has worked for the Zvyazda (Star) newspaper and collaborated with the largest Belarusian media portal TUT.BY. She currently works with the oldest Belarusian independent newspaper Nasha Niva/NN.BY. Buzhan has participated in group exhibitions at Aff Galerie (Berlin, 2016), ЦЭХ (Tsekh) (Minsk, 2014), Belarus Press Photo (Minsk, 2015), and the TUT.BY gallery (Minsk 2019). Her personal projects deal with such topics as freedom and religion.

Volha Shukaila is a photojournalist and photo editor, born in 1988 in Minsk. Shukaila graduated from Minsk State Technological College with a degree in photography and also finished the Belarusian State University of Culture and Arts with a degree in culturology. In 2013, she attended photojournalism courses taught by Yuri Kozyrev, Tatiana Plotnikova, Andrei Polikanov, and Stanley Greene. Shukaila has been working as a photo editor since 2014 and as a photojournalist for the largest independent Belarusian online media portal TUT.BY since 2017. Her main professional interests are contemporary issues, environmental protection, and the social sphere.

Viyaleta Sauchyts (b. 1992) has been a photojournalist since 2016, based in Minsk, Belarus. Sauchyts has been working for major Belarusian media covering news, culture, and social issues in Belarus. She has also covered the election campaign and protests in Belarus in 2020. Sauchyts works with such topics as women’s rights, gender equality, and national identity.

It will be an opportunity to rethink freedom and its meaning. In many ways – both from the perspective of the state and the nation and personally. Milda Ivanauskienė, director of MO Museum

The best time to see the projection outdoors – at dusk 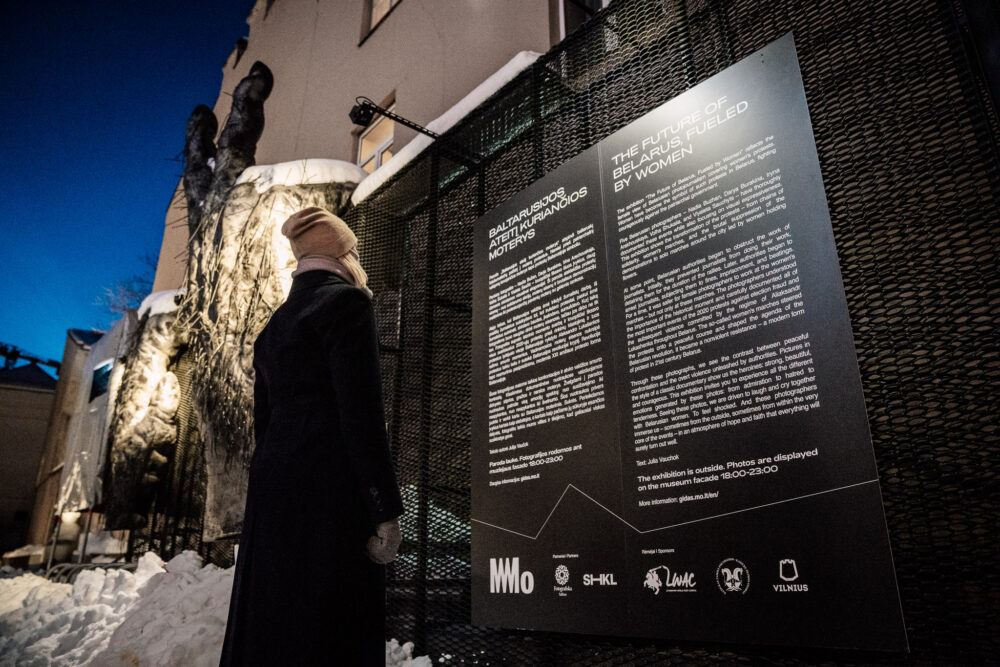 Photographs are projected on the wall of the MO Museum building and are best seen at dusk, 6:00 pm to 10:00 pm. The exhibition will last till March 4th.

“This outdoor projection will be another opportunity to safely enrich the reality of quarantine with artistic projects and culture. Without gathering, quietly, in the evenings outside everyone will be able to see all the photographs. At the same time, it will be an opportunity to rethink freedom and its meaning. In many ways – both from the perspective of the state and the nation and personally”, adds the director of MO Museum.

More about the outdoor projection “The Future of Belarus, Fueled by Women”: