The Power of Symbols: “Madonna with Icelandic Landscape” 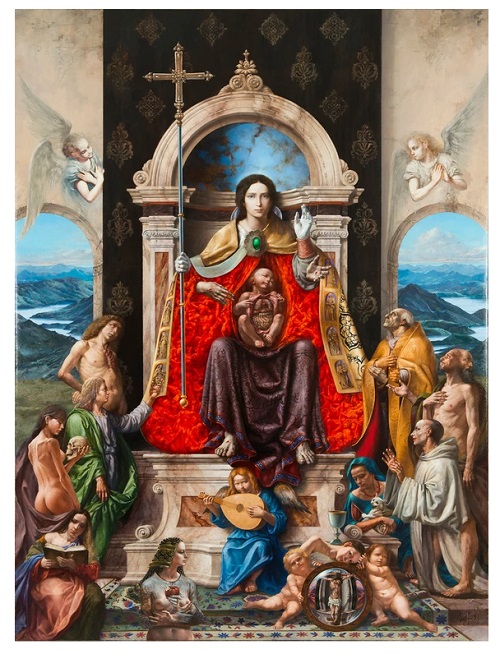 More about the artworks and its author:
Artist Vytautas Narbutas (born in 1962) has been living in Iceland for more than 20 years. In Lithuania, he is better known as a set designer who created scenography for Rimas Tuminas’ and Oskaras Koršunovas’ plays (Cathedral, Tartuffe, etc.). Madonna with Icelandic Landscape presents him as a painter of Neo-Renaissance style. It took five years for the artist to finish this theatrical painting which is full of symbols.

Vytautas Narbutas draws inspiration from Renaissance artists who cared to depict the image of the world as realistically as possible. The painter combines the classical painting method with modern expression. The figures standing around the exalted Mother of God represent the classical principle of painting, and the modern expression is revealed by disregarding proportions: the figure of Madonna is enlarged and monumental. The artist follows the laws of perspective and creates a panoramic landscape revealing the beauty of Icelandic nature. What meanings lie behind the symbols chosen by Narbutas? What tragedy is left unspoken by the Mother of God?

In a traditional Renaissance painting, the author introduces his modern view and creates an authentic multi-layer iconography. The artist depicts the Mother of God with papal regalia: the mantum, a cross-shaped ferula and a ring. The figure covered with a solemn cloak embraces people and protects them from the blood-soaked gates of hell opening from under the cloak and symbolizing suffering and pain. These attributes and gestures illustrate papal supremacy. In the bottom of the painting, omniscient angels – cherubines – are holding the mirror of the future which reflects the fate of the crucified Jesus Christ. Saint Mary Magdalene, humbly leaning on the mirrored reflection of the Crucified, expresses her sorrow and repentance.

In the magnificent figure of Madonna, two fundamental stages of Jesus’ life intertwine: the beginning of his earthly life (the life maturing in the womb) and the moment of crucifixion (Jesus’ hands with stigmata showing from behind the cloak). The artist is dealing with a difficult and dramatic issue of the burden of motherhood: a mother gives her child life but also determines his death.

Traditionally, there are no manifestations of sinfulness in Madonna paintings. However, Narbutas does not follow the canon and dedicates the bottom left corner of the painting to women – allegories of various evils. The author ignores the traditional meanings of symbols and interprets a woman with a book as pride, not as wisdom. The naked figure breastfeeding a skull (the Death) symbolizes vanity. The silhouette of Eve embraces herself with her hands and is tempted to taste the forbidden fruit. The leaning naked figure is the martyr Saint Sebastian.

On the right, the man with two faces represent the circle of human life: vibrant youth and troublesome old age. Colours are also symbolic in their own way: the cloaks covering the bodies of the saints are not coloured randomly. The green cloak indicates the hope of faith and eternal life, and the gold one symbolizes the power of the Church.

By interpreting the traditional religious iconography in an original way, the artist seems to say that despite the epoch, the main storyline of human life and its tragedy remain intact.

Vytautas Narbutas about the artwork:

“For many years, I wanted to paint Madonna. But I didn’t know how, I didn’t know about what. And one day, both the image and the idea came to my mind. However, during those five years, many things changed, and a lot of new details emerged. I wanted to link this work with Iceland, where I live. So, I made windows through which Icelandic landscape can be seen.

The main theme is motherhood, even though there are several secondary themes. The tragedy of motherhood is that a child gets both life and death from her. The baby Jesus in his mother’s womb with his internal organs opened shows that he had a physical body and was suffering on the cross like a human being. The painting is full of symbols. Death bodies and skeletons represent hell in red colour, and Mary is protecting us from it with her cloak. The figure with a book in the bottom left corner represents pride, and the one behind it is vanity breastfeeding the Death. On the other side, there is a double-headed man illustrating a linear history from youth to old age. Behind him, there is a monk with a cloak in gold representing the Church, and so on.

In the foreground, we see Eve, and a bit further there is Mary Magdalene leaning on a convex mirror which reflects the future: the crucifixion of Jesus in the same surroundings and with the same Icelandic landscape, only that is already getting dark… And so on… Madonna’s face is the only object I painted in one sitting. I didn’t dare to touch it again. When Madonna was already acquired by the MO Museum, a tear of blood appeared under her left eye. I don’t know how and where it came from. I tried to remove it, even to scrape it with a knife… It didn’t work. And I decided that it had to be like this.”